Since then the band has brought on a full-time bass player, Andrew, to complete the trio and they are continuing to pump out song after song and rehearse for future gigs.

Place in the Sun
First single from the Thirty Three Degrees debut album. A story about keeping a dream alive and enjoying your place in the sun. This is the perfect summer rock tune, think Tom Petty, Neil Young and the rest.  Plenty to spark interest in the vocals and full band backing and a rocking up-tempo backing track.

Single OUT NOW! Stream it here: 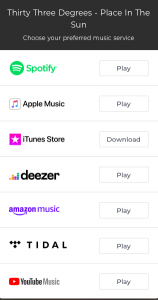