Daxton releases his new album ‘Electric Satellite’, a twelve-track slide blues album with up-tempo spacious songs produced by Pat Dow and Marshall Cullen. Daxton has worked with Pat on many projects – someone who has a keen ear for Daxton’s rustic blues mixed with psychedelic pop/rock sounds.

The new album is Daxton’s seventh following the release in 2018 of ‘In Verses’ which features songs covering his favourite themes: life and death, the yin and yang of life, love and loss, while still keeping his always positive and up-tempo vibe.

Producing and playing music since his early teens, Daxton’s passion has kept him continually creating new material both for his band and solo career. On stage, Daxton comes across like he was born to play, his unique guitar style blending perfectly with heart-warming vocals.

Daxton has appeared at major festivals including the Sydney Blues & Roots and Tamworth Country Music Festival where he supported artists such as Kasey Chambers and Beccy Cole. He also has had one of his tracks ‘Moody Liz’ featured in the popular American TV series Doll House.

Based in Sydney, Daxton is best described as a blues/rock artist with a twist of pop and rock. He plays slide guitar rock/blues songs with a fresh and innovative sound. The new album ‘Electric Satellite is a heavy, rustic blues rock album with psychedelic pop/rock sounds scheduled for release in 2022. 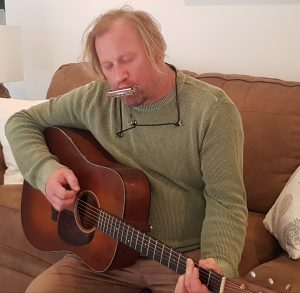 Electric Satellite
The title track to the new album is a frenetic up-tempo post punk folk blues anthem. A full band and all the rocking bells and whistles to make it work.

Bad Tmes
Down and dirty blues from Daxton, featuring blues harp, slide guitar. Mid-tempo drums and bass, snappy guitar licks and riffs and the whole thing comes in at a rockin’ 2mins 47seconds.